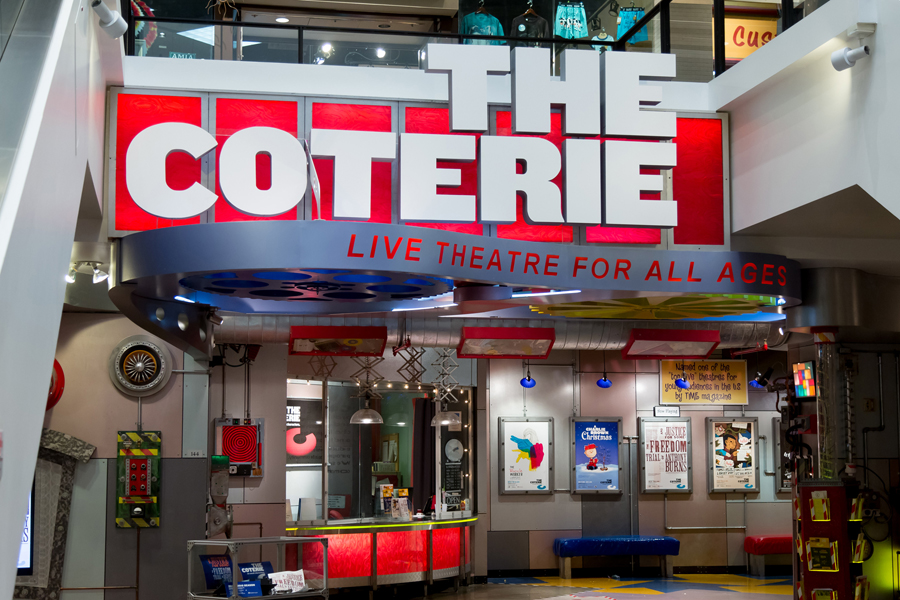 The Coterie, a professional Equity theatre, is among the top five theatres serving families and young audiences in the United States, according to TIME magazine: "groundbreaking...one of the nation's most respected."  Travel+Leisure magazine's top ten list of children's theatres described The Coterie as "a theatre that resolutely refuses to talk down to its audience." The mainstage season consists of six full productions: three for older students (junior high and high school) and adults, and three for younger audiences and families. The emphasis is often on new or recent works.

Through ingenious programming, The Coterie plays a vital role in the greater Kansas City area developing new generations of audiences for the performing arts with plays that reach a variety of age groups. In its first 40 years, The Coterie has given over 13,000 performances of 285 productions on its mainstage, playing to approximately 2.2 million people. In 2017, The Coterie celebrated the milestone of serving over 100,000 students and families in a single season with its mainstage productions, acting classes, in-school workshops, and community outreach programs.

In the late 1980's and early 1990's, The Coterie began creating, developing, and producing new works of theatre for young audiences. This included the world premiere productions of Sheldon Harnick's Dragons and Edward Mast's Wolf Child: The Correction of Joseph, as well as The Very First Family, Across the Plains, Nate the Great, Gatherings in Graveyards, Oz, and numerous premieres from the Little House series. Further, The Coterie mounted the professional American premiere of Lord of the Flies in its Great Books/Banned Books season, and the first staging of the opera Green Eggs and Ham, after its concert premiere. Regional premieres have included Athol Fugard's My Children! My Africa! and Valley Song. In 1995, The Coterie was awarded the prestigious Lila Wallace Reader's Digest Award for its world premiere of Alicia in Wonder Tierra, a successful production involving actors in the Latino community.

In 1999, The Coterie's world premiere commission of The Wrestling Season by Laurie Brooks went on to be produced around the country after it transferred to Kennedy Center for New Visions 2000: One Theatre World. The play received additional nationwide exposure when it was published in its entirety in American Theatre Magazine (November, 2000).  Brooks has often served as playwright-in-residence at The Coterie and has premiered a number of her works here, including her original script, Afflicted: Daughters of Salem, as well as her stage adaptations of Andrew Clements' No Talking and Terry Brooks' The Secret of Courage.

Several of The Coterie's premieres were developed at the Kennedy Center's New Vision/New Voices new play festival and at NYU's Educational Theatre Program at Provincetown Playhouse.

In 2004, Producing Artistic Director Jeff Church began the Coterie's Lab for New Family Musicals by working with Lynn Ahrens and Stephen Flaherty to create a Theatre for Young Audiences version of Seussical adapted from Broadway. It has since become one of the most produced plays in educational theatre in United States. The Coterie’s Lab for New Family Musicals has hosted new work by musical theatre artists Stephen Schwartz (Geppetto & Son), Willie and Rob Reale (The Dinosaur Musical), Harry Connick Jr. (The Happy Elf), and other works by Ahrens and Flaherty (Twice Upon a Time and a TYA version of Once On This Island). Click here to read KCUR's interview with Lynn Ahrens on this collaboration.  More recently, The Coterie hosted Pulitzer Prize winner David Lindsay-Abaire to fashion a new version of Shrek the Musical. Other recent musical world premieres include Madagascar - A Musical Adventure and the TYA version of Chitty Chitty Bang Bang.