Afflicted explores the untold story of the Salem girls – Abigail Williams, the leader; Ann Putnam, Mercy Lewis, Mary Warren, and Betty Paris – and the crucible of events that led to the contagious Salem Witch Trials. Amongst the girls, allies are found, promises made and broken, power taken... deep in the woods of Puritan New England. Denied all sense of play and imagination, the girls unite by dancing around a fire, and soon force the slave Tituba to tell their fortunes. Author Laurie Brooks is the playwright of some of The Coterie's coolest new plays.

THE COTERIE SPARKS | Preteen through Adult Series (suitable, we feel, for 10 and older)

Critics Praise the Power of Afflicted:

"A potent drama... impresses as an act of creative imagination while building to an explosive, dramatic conclusion... a sharp-looking show... The performances are focused and vivid... dramatically riveting... This show really packs a punch."
- The Kansas City Star

“Intriguing... a snapshot of how social pressures and fear can cause unconscionable actions... a powerful and compelling story”
- KCMetropolis.org

“A deep look into the psychology of the girls who so deeply affected the innocent inhabitants of Salem... impressive... The closing of the show... is inspired.”
- BroadwayWorld.com 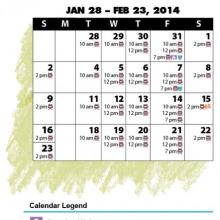 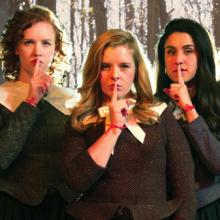 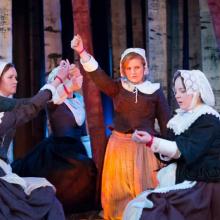 Visit coterie.edublogs.org to tie your Coterie experience to your curriculum with lesson plans, video insights, study guides, and more!