Music and Lyrics by Richard M. Sherman and Robert B. Sherman
Adapted for the stage by Jeremy Sams
Based on the MGM Motion Picture
Licensed Script Adapted by Ray Roderick
Part of The Coterie's Lab for New Family Musicals
World Premiere Theatre for Young Audiences version directed by Jeff Church

Take a fantastic musical adventure with an out-of-this-world car that flies through the air and sails the seas. The sensational songs include “Truly Scrumptious,” “Toot Sweets,” “Hushabye Mountain,” and the Oscar-nominated title song, “Chitty Chitty Bang Bang.”

"A Riot... thoroughly delightful...
with superior performances and... humor that cuts across age categories"
- The Kansas City Star

"Truly Scrumptious... what a wonderful way to end [the season],
flying high on fenders of the most magical car ever"
- BroadwayWorld.com

"Beautiful and creative...
My daughters gave the show two thumbs up and asked to go see it again"
- KCParent.com

Take advantage of these free "extras" being offered during the run of Chitty Chitty Bang Bang (with paid admission):

“How to Host Afternoon Tea”
Sundays, June 29 & July 20, 12:45-1:15 p.m.
The Daughters of the British Empire will hold a FREE pre-show discussion on the finer points of hosting afternoon tea, Truly Scrumptious-style.

Give-Away Sundays
Sundays, July 6, 13, 27, and August 3, 2:00 p.m.
Every audience member will be automatically eligible to win FREE Coterie gifts, such as posters signed by the cast, backstage tours of the theater, and Spotlight Club Passes to attend Coterie’s 2014/2015 Season. 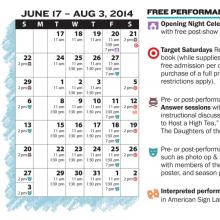 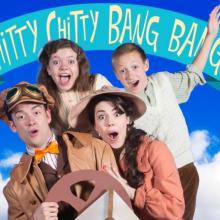 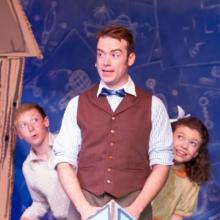