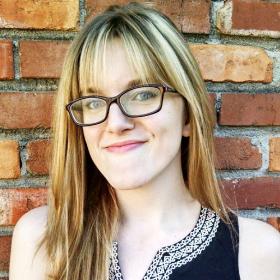 Anna May Smith is a teaching artist, comedian, writer and actress. She graduated from the University of Kansas with a degree in Theatre Performance and a love for comedy. She is a member of the professional cast at ComedyCity, and has been performing short and long form improv, musical and sketch comedy there since 2011. Through ComedyCity, she was able to start coaching with Operation: Show! A non-profit organization that teaches improv comedy to high school students, while raising money for their drama and forensics departments. She has been converting high schoolers into improvisers since the organization's conception in 2012. Anna is also a standup comic, performing regularly in clubs and venues all over Kansas City, and winning 2nd place in the Pitch Weekly's "Best Of" award for standup comedy in 2015. She is a founding member of Kansas City's original all-female comedy troupe, The 5'10" Club. She is a lover of cats, melted cheese, dancing, and Buffy the Vampire Slayer.