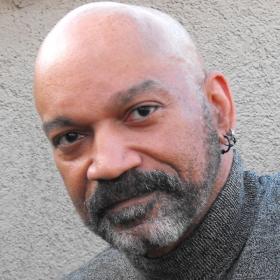 Brad Shaw is a Coterie mainstay. He has directed, designed costumes and sets, house managed, and served as a Coterie Resident Artist for over 14 years. Brad’s recent Coterie credits include No Talking, The Wiz; Bud, Not Buddy; and Once On This Island. Other recent credits include An Otherwise Hopeless Evening at the Jewel Box Lounge. Brad is affiliated with MCC Spirit of Hope and has been a contract teacher for KCYA since 1986. Brad started teaching in Early Childhood Education and has since taught all ages in the surrounding school districts. He has also taught acting, costume design, and puppetry in New York at Elmira College. Brad was an integral part of the building and opening of the Gem Theater, where we wrote and produced 18th & Vine. Brad attended UMKC and the Kansas City Art Institute and enjoys art and playwriting in his spare time.