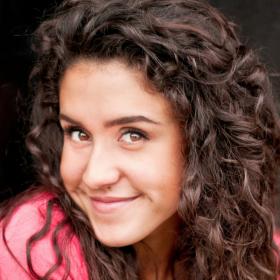 Emily Shackelford returns to The Coterie stage in Schoolhouse Rock Live! after thrilling audiences in Afflicted: Daughters of Salem and The Wiz... twice! She is a former Coterie teaching artist and has previously appeared in Alexander and the Terrible, Horrible, No Good, Very Bad Day – The Musical, Seussical, Spring Awakening, and Lucky Duck at the New Victory Theatre. Other local credits include Cabaret and The Foreigner at Kansas City Rep, 1776 and Kiss Me Kate at Musical Theatre Heritage, Eating Raoul at Egads! Theatre, Aladdin at Starlight at the Kauffman Center, The Death of Cupid at The Living Room Theatre, Pride and Prejudice at Metropolitan Ensemble Theatre and Bingo The Winning Musical at Heartland Theatre. She holds a BFA in Theatre Arts from Stephens College.