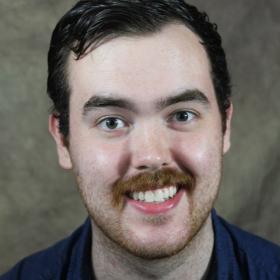 Evan C. Phillips is a graduate from Emerson College and he is one of the first people to receive their new BFA in Comedic Arts. Evan is a writer whose work has garnered significant critical praise. He has won Evvy awards for his comedy sketch Sometimes A Fantasy and his autobiographic memoir Tales From The Looney Bin. He has also been award-nominated for his standup comedy and his teleplay Swashbucklers. When not writing, Evan often appears onstage, most recently in The Olathe Civic Theatre Association’s production of Peter and the Starcatcher. Evan has deep roots at The Coterie having been a longtime member of both the Comedy and Acting Master class as well as appearing in their seasonal smash hit Rudolph The Red-Nosed Reindeer: The Musical. Evan is thrilled to begin this new chapter at The Coterie teaching the next generation of artistic minds a bit of the wisdom he’s come by in his journeys!