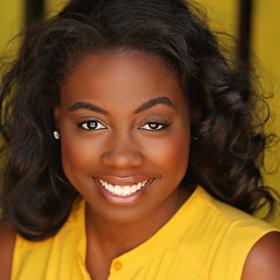 Jackie Price was obsessed with watching and singing along to films like Mulan and Rodgers and Hammerstein’s Cinderella starring Brandy and Whitney Houston. In middle school she starred in Bugsy Malone Jr. and has loved performing onstage ever since. Jackie made her Coterie mainstage debut in PUFFS after having worked as a teaching artist and actor with the Dramatic STD/HIV Project. Recent performances include Caroline or Change at Spinning Tree Theatre, Godspell at the University of Central Missouri Theatre, and Memphis at the Black Repertory Theatre of Kansas City.