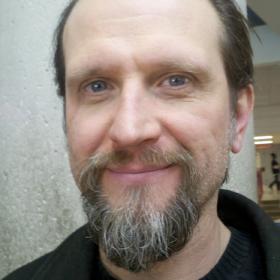 Scott “Rex” Hobart is the Coterie's Resident Technical Director. Scott was introduced to theatre as a child thanks to his mother who took him and his sister to plays. His formal theatrical acting and composing debut was in Night of the Living Dead (2007 and 2008). Between art school and working odd jobs that allowed him time off to go on the road with his bands, he developed his visual art talent and learned tools and materials. In Buffalo, NY, Scott jumped at the chance to help build a set for the Buffalo Children’s Theatre. As wife Paula continued her graduate studies, the Hobarts moved to Santa Fe, NM, where he painted and built sets for the Santa Fe Community Playhouse. Now happily back in Kansas City, he also writes and sings honky-tonk country songs with his band “Rex Hobart and the Misery Boys” (nationally, locally, and yes, private parties). He studied visual art at the Kansas City Art Institute and completed his undergraduate degree in American Cultural Studies at UMKC.