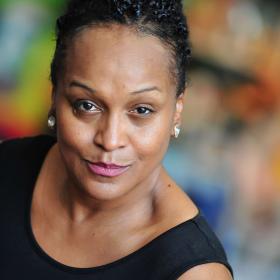 Sherri Roulette-Mosley is a familiar face at The Coterie, performing with us for over 27 years since A Woman Called Truth in 1991, also appearing in Becoming Martin, The Nine Who Dared: Courage in Little Rock, Rosa Parks and the Montgomery Bus Boycott, Freedom Sisters, and A Star Ain’t Nothin’ But a Hole in Heaven. Other local credits include Gem of the Ocean with the Metropolitan Ensemble Theatre, Dark Was Their Path at In Play Theatre, and Waiting to Be Invited with KC MeltingPot Theatre. A Kansas City native who loves songwriting as a hobby, Sherri has a BA from Grambling State University and is the founder of the breast cancer awareness organization, THAT Pink Roulette Sisters’ Circle of Hope.