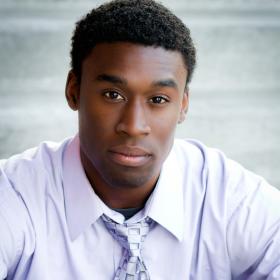 Tosin Morohunfola has been a Coterie Resident Artist as well as director of The Coterie's tour of The Presidents! He was also in The Coterie’s productions of The Wiz; Bud, Not Buddy; Shrek the Musical; The Wrestling Season; The Outsiders; Seussical; Maul of the Dead; and Lucky Duck at the New Victory Theatre Off-Broadway in New York. Other credits include: Romeo and Juliet tour at Heart of America Shakespeare Festival, Blacktop Sky, Ruined and Speech and Debate at Unicorn Theatre, This is How it Goes at The Living Room, and The Drowsy Chaperone, Is He Dead?, Harry the Great and The Presidents! at Creede Repertory Theatre. Film credits include Rook, As a Puzzle, Alpha Bravo Charlie, and Destination Planet Negro. Tosin is founder of the Multicultural Theatre Initiative where he served as Artistic Director for two years and produced four of his own original plays.