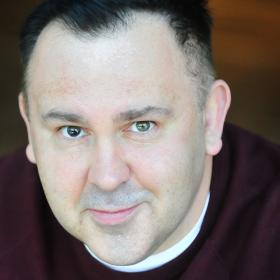 Jamie Campbell is a nationally touring stand-up comedian, screenwriter, and actor.  As a comedian, his solo performances have garnered praise from critics and audiences alike. A veteran of over 30 comedy and Fringe festivals, his performances have earned numerous accolades including "Best of Fringe" honors in Kansas City and Tucson, "Best Stand-up or Variety Performance" by San Antonio's Bexar Stage, and Chicago's "Best Stand-Up Comedian" by The Chicago Reader.  His album, Tell Me You’re Proud of  Me, debuted at #1 on Amazon’s comedy charts.

Hundreds of his comedy sketches have been produced on stages throughout the United States, and his work as a playwright garnered some early recognition, including top honors at StageLeft's Drekfest for his play A Fist Before Dying and the Broadway World award for "Best New Work" in Chicago Theatre as co-writer of the musical four play. He has worked as a staff writer for the cult-favorite webseries Lunch and Learn, which has been viewed millions of times online, and has a short thriller currently in pre-production in the United Kingdom.