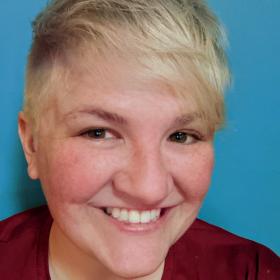 Sarah Mattie began her theatre career with her breakout role as the Candlestick Maker in some version of Robin Hood. She had no lines, being only four or so years old, but she hasn’t ever forgotten the chorus to the showstopping number. She also remembers her first-ever theatre games…from that same class.

Fast forward a few years, and Sarah attended KSU for theatre. Though she majored in stage management, something about those early days of theatre games and fully committing to being a Candlestick Maker who didn’t even have a candle as a prop drew her back into youth theatre. She earned her master’s degree in theatre education from Emerson College and hasn’t looked back!